Wearing a beautiful and correct reproduction body, K 297 has been fully gone through mechanically and successfully participated in the 2018 Lansing to Dearborn run. An older restoration, it shows well and is accompanied by the correct rebuilt Holley magneto.

The Ford Model K is an upscale automobile that was produced by Ford. It was introduced in 1906 and replaced the earlier Model B. It was built at the Ford Piquette Avenue Plant. The model K was aimed at the top end of the market and featured an inline-6 (the only Ford six until 1941) giving 40 hp (30 kW). The wheelbase was 120 in (2896 mm) and could be ordered either as a touring or roadster model. 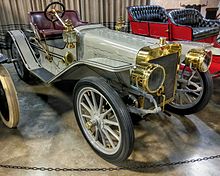 In 1907, the second sales year of the Model K, almost 500 examples were sold, making it the best selling six cylinder model in the world.

As period journals reported, Ford Motor Company went in another direction, moving to one chassis, a mid priced car, the Model T, leaving the multi-line business model used by most auto makers of the period. However, sales and profits from the Model K helped Ford Motor Company become the largest automaker in number of sales in 1907, and along with the Model N, was the only Ford model sold through three model years (1906-1908) prior to the advent of the Model T.